The Wild Coast, situated in the Eastern Cape, is a rare stretch of sparsely developed coastline larglely held in trust for the use of the people.

The Wild Coast is something of a departure from the travel norm in South Africa. This becomes most starkly evident when the region is approached from KwaZulu/Natal, at which point the landscape changes abruptly from the highly developed suburban aspects of KNZ to a much more traditional, African style social backdrop that seems to belong in a different part of Africa altogether. 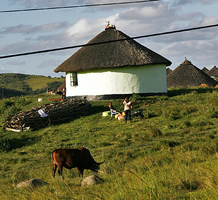 In fact it is surprising to many visitors the degree to which traditional life is alive and well in South Africa. Since the established touring routes of the country tend to focus on the richly textures areas of white domination, they tend also to gloss over, and at times ignore completely the rural identity of a significant portion of the country.

On the Wild Coast, and within the hill country of the Transkei interior, almost no accommodation is made for modernity. The area is a jewel of southern African coastal ecology, softly overlain by the simple accoutrements of African village life, and fiercely protected by all its inhabitants.

Two hundred kilometres of undeveloped, unspoilt beaches and estuaries are there to be discovered, with a handful of tour operators to help, and a comprehensive selection of accommodation options to make your trip comfortable.

The region is, of course, under constant threat from the same over development suffered by the KNZ South Coast. It is such a beautiful area, and so completely untouched by capitalists and property developers, that it does, and always has represented a terrible temptation for many in positions of wealth and power. The battle to keep the Wild Coast wild, therefore, is ongoing.

Activities on the coast range from hiking a variety of routes, with the possibility, if well guided, to hike the entire length of Wild Coast. Several village based tour operations host such activities and estuary kayaking, nature walks, horse riding and fishing. There are also many village tours and cultural exchanges which allow you to meet and interact with local people. The local coastal ecology is largely intact allowing for excellent bird watching and nature trails, particularly in the estuaries, rivers and riparian forests.

The Wild Coast shares its climatic characteristics with the coast of KwaZulu/Natal. There are perhaps some accommodations made to the proximity of the temperate regions, but the area is part of the summer rainfall region and generally enjoys warm to humid, sub tropical conditions.

Winter is the most comfortable time to visit the Wild Coast, particularly as most of the village based or communal camps and accommodations are not air conditioned, but summer is the best time to enjoy the diverse ecology, and in particular the butterflies and birdlife, not to mention local succulents and wildflowers. The December school holidays are a very busy time for the South Coast, and for most vacation destinations in the country, so advance bookings and enquiries are a good idea then.

Crime: The Wild Coast shares the same general dangers of street crime and muggings as the rest of South Africa. Muggings are frequent, and long and lonely beach walks at any time are definitely not advisable.

While long distance beach hiking is one of the most enjoyable activities on the coast, these days the risks of robbery and muggings are just too high for independent excisions, so contact a tour operator or make arrangements through your lodge or hotel.

On the whole walking around during the day, and in busy areas, and being generally out and about, is not dangerous, but avoid walking around at night, and definitely do not venture out on the beach alone after dark. Seek and follow local advice on the matter of crime and general safety wherever and with whomever you go.

In most of South Africa tropical diseases are rare. Although the South Coast enjoys a sub-tropical climate, incidences of malaria are rare, however there lots of mosquitoes about and so repellent is a must. As a matter of policy a course of anti-malarial drugs is advisable in the province, particularly if you intend travelling further north up the coast to Maputaland.

Travel Doctor clinics are to be found in all the major centres where you can get health advice on malaria, yellow-fever, AIDS and any other tropical diseases, and acquire all the vaccinations and prophylactics necessary for your extended journey.