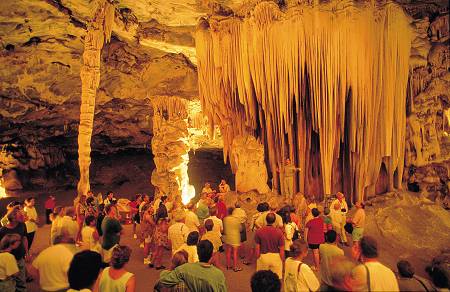 Discovered (again) in 1780 and opened to the public in 1806, the Cango cave system is a winding network of jewelled caverns stretching well over 5km (so far discovered)

The first great chamber you enter is called the Van Zyl hall (named after the man said to have discovered them), is as long as a football field, with gorgeous dripping limestone formations.

There are two tours available to the general public and from where the “standard route” ends the “adventure tour” takes you a little further into the cave and through some tight squeezes some no more than 30cm high. The caves are a humid, warm and reasonable well lit. Take good walking shoes and dress lightly.

Some Cango caves mystery and intrigue:

In 1975 the mysterious dead end, was discovered to be a 3 Kilometre extension in 2 parts. Cango 2 and cango 3.

Cango 2 and 3 are closed to the public to preserve the pristine formations from the effects of human breath on the colours.

There is an ancient engraving in the Caves: it’s the only piece of cave art in South Africa in a completely dark area. How did the artist prove himself with a light source to work? The engraving shows and elephant superimposed on an eland – and yet, amazingly, you see only the elephant when you view the work from one side – and only the eland when you view it from the other.

the mystery of Johnnie van Wassenaar’s 16-mile tunnel. This level-headed man once spent 29 hours underground – and, according to him, spent much of that time walking upright. Was the entrance to Johnnie’s lost chamber bricked up at some stage – perhaps during the construction of the stairway into the Van Zyl’s Hall?

Why have so many Caves guides committed suicide? And is there a ghost in the Sand bypass (a tunnel which branches off from the Drum Chamber)? One of the guides drank poison in the bypass – and nobody has ever been able to solve the puzzle of why the lights in the Sand Bypass fuse so often

Head to the Cango Caves:

Best website for info, tours and eerie cave pictures: CangoCaves.co.za
How to get to Oudtshoorn: Baz Bus (following Trekker’s tracks)
Where to stay: Backpackers’ Paradise