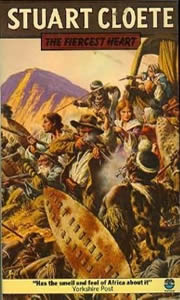 Growing up I lived and breathed the work of South African writers like Stuart Cloete, who chronicled the history of white South Africa in factual novels that appealed very much to a child steeped in the ideals of empire. Cloete related rather one sided tales of the Great Trek, the Anglo/Zulu War, the Anglo/Boer War, as well as the various sideshows and sub-adventures that all went to build the complex human mythology of white South Africa.

Another in the genre of historical fiction was the extraordinarily successful Wilbur Smith, who created the renaissance hero Sean Courtney. The fictional adventures of Sean Courtney visited all the major events of South African history that could plausibly be slipped into the span of one man’s life. Smith’s were among the more racy versions of popular South African prose, compared at the time to Harold Robbins, and with such immortal explanations for large African backsides as the necessity for a heavy hammer to drive a long nail.

While this is great reading material – for a 12 year old at least – South African literature is a different animal, and as the maxim goes – that out of hardship and repression comes great art – so South African writers have produced a long and august body of work that once again stamps the nation as something more than just a run of the mill developing country.

One of the first towering figures in South African literature was Olive Schreiner, who produced in 1883 her landmark The Story of an African Farm. She later published a biting 1897 novella, Trooper Peter Halket of Mashonaland, that was a damaging exposé on the activities of Cecil John Rhodes and the British South Africa Company in the brutal and duplicitous occupation of Rhodesia (Zimbabwe). It was almost from that point on that a dam burst of protest literature began to flood the fertile plain of South African race policy. 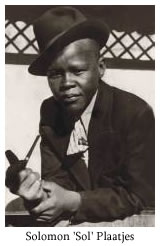 To the fore appeared such names as Sol Plaatje, Sarah Gertrude Millin, Mongane Walley Serote, Miriam Tlali, Alan Paton, Nadine Gordimer, André Brink and many others, all of whom found fruitful inspiration in the emerging injustices of white minority rule. This genre quickly achieved dominance and came almost to define South African literature abroad, and it is easy to see how. It was the blunt, black and white portrayal of South African race policies in such work as Alan Paton’s Cry, The Beloved Country that most easily fit into western perceptions of life in the South Africa of the 70s and 80s.

There is, of course, much more circulating in the market than just this. South Africa has nurtured two Nobel laureates – Nadine Gordimer in 1991, and John M. Coetzee in 2003 – attesting to the fact that social indignation is just a small part of the larger written picture. In the case of Nadine Gordimer, her social and political commentary remain unrelenting, but J.M. Coetzee, perhaps South Africa’s most celebrated writer, imbibes in his works a less obvious overtone of race politics. His narratives, cruel at best, and bitingly clear in their perception, offer no more than a critique on the general peculiarities and contractions of South African life, with no particular concession made to modesty.

Quite a number of theses obvious contradictions exist within the field of literature itself. Take for example the fact that, although South Africa has 11 official languages, annual publishing output remains weighed heavily in favour of English language publications. To this Afrikaans comes a close second, with the nine indigenous languages trailing behind in various shades of irrelevance. Obviously this is a product of past inequalities, which of course tends to bring one once again around to the perennial and un-dead issue of race in South African society. 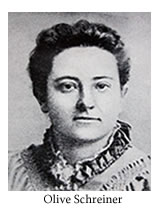 English literature is English literature, and tends to fall under that umbrella no matter where it is written. With regards to black language groups, imperial divisions of Africa during the 19th century tended to take no account of the boundaries of native affiliation, which today means that all the main indigenous languages spoken in South Africa are also spoken elsewhere, confusing the specific South African national identity of any work written in that language.

Afrikaans, however, is a wholly South African product, and despite being the language traditionally most hated by militant blacks, has no close cousins elsewhere on the continent, and is therefore often regarded as the only authentic language of South African literature.

A loose grouping of Afrikaans writers of the 1960s, calling itself Die Sestigers, or the Sixtiers, was formed out of a core of influential novelists, commentators and poets, including the iconic renaissance figure Breyton Breytenbach – prolific painter, poet and writer in both major languages – and others of equal stature such as André Brink, Etienne Leroux, poet Ingrid Jonker and the perennial Elsa Jourbert.

Much controversy was generated from within this group, with some of leading voices in Afrikaans and English conscience writing, André Brink principal among them, but also Breyton Breytenbach, who was imprisoned for seven years during the 1970s in part thanks to a mixed race marriage. Others in the group included ‘coloured’ poet Adam Small whose stinging works of social commentary and satire were as bitter and divisive as the race dynamic in South Africa itself.

Most of the major works in Afrikaans have found their way into English translation.

Whatever the merits of this argument, it would perhaps be an unprofitable avenue of discussion around the dinner table with a black South African, and so for those wanting to dip into black South African literature the choice is both wide and growing. For the sake of a broader reach most black writers of consequence have tended to write in English, and none, it would seem, have been particularly diminished for that fact. It goes without saying that black literary expression has traditionally been hampered by widespread illiteracy, very limited access to the print media and censorship. Subsequently the birth of this fraternity has been slow, but it has also been both fruitful and varied.

A book currently doing the rounds is a work of travel writing by Sihle Khumalo entitled Dark Continent My Black Arse. Although not by any means among the heavyweights of literary excellence, it is unusual inasmuch as so very few blacks have attempted work in that genre, and certainly travel for its own sake within and without Africa for Africans is such a rarity that in itself this has warranted considerable comment and attention.

Black literature in South Africa, as with anywhere on the continent, began with the oral tradition, augmented by song, which has always been a powerful tool of community fellowship and communication in Africa. Thereafter, with the increases in native education brought about during the 19th and early 20th century, a number of black South Africans began to receive higher education in the United States and Europe. Among these were to be found the early national leaders in liberation theology and fledgling political activism. Two such individuals were Solomon ‘Sol’ Plaatje and John Langalibalele Dube. Both men were mission educated and emerged as social leaders through the medium of independent churches, and who later went on to publish and write, setting in motion a nascent process of renewal that would take more than a century to reach fruition.

In the lead up to independence in South Africa, and in the period immediately afterwards, the higher sense of moral achievement that went with the toppling of the apartheid regime in South Africa prompted a period that saw many works of self congratulation written by black writers. This tendency was quickly deployed in a campaign to recapture the soul of Africa lost to the wilderness years of assimilation and segregation, and has been a largely healthy period of unaccustomed expression and self exploration.

In tandem with this, white literature in South Africa, and in particular Afrikaner literature, has tended to be sympathetic, although careful to ensure that the cultural pillars of white society in South Africa are not weighed down by undue guilt and disapprobation. Nadine Gordimer, the doyen of the white anti-apartheid movement, and one whose revolutionary credentials remain above reproach, suffered the removal of one of her books from the new national curriculum under accusations of elitism and racism, which for many whites was simply too absurd to credit.

In analysis, then, it seems often that white literature has been, and remains cathartic in the sense of it revealing the community’s general discomfort with both the historical existence and the current aftermath of apartheid. White literature reflects the minds of many who desire to move on from the past, while black literature is still mono-dimensional, and reflects, inasmuch as it examines race at all, an anger towards and dislike of white people.

To try and tear away from the subject of race for a moment, and for those with a mind to delve into it, historical reflection and analysis is a particular passion of South African writers, readers and publishers. The market is enormous, and is distributed not only in South Africa but throughout the Anglosphere. Examination and re-examination, memoir, critique, biography and autobiography, all dwell with at times an unseemly obsession on the past. Combined with this is a large output of what might be termed popular history, most of it with an English speaking slant, that traces and retraces, and retraces again the iconic themes of African and South African colonial history. 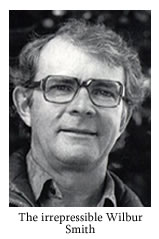 Somewhat in the shadows, but as an important part of the picture, South Africa also maintains a long tradition of literature of a fine, soft and apolitical nature. A superb example is the work of Dalene Matthee, who penned the iconic Afrikaans novel Feila’s Child (since translated into English and a number of other languages), and other works centred in the region of the Eastern Cape and the elephant forests of Knysna. Another is Sarah Gertrude Millin, whose sensitive portraiture of a young South Africa of the late 19th century continued and fortified the tradition of clear observation and bold narrative in South African prose.

One among the many South African literary titans was Laurens van der Post, a writer of undeniable magnitude, but also a man representing the quintessence of white South Africa in ways other than the stereotypes of racism and brutality. Van der Post’s work and influence reached far beyond the borders of South Africa, to the extent that he was up until his death a close friend and confident of the Prince of Wales, who championed the philosophical aspects of Van der Post’s work that appealed to many with neither links nor interest in Africa. He was a war hero, a farmer, a chronicler of diminishing native life, and a literary practitioner of a deeply sensitive and incisive character.

In the area of international literature the field has been so dominated by local heavyweights that much of what is written and published in South Africa is home based and home themed, which is the surest and only way to get under the skin of a country that you choose to visit.

For a visitor to South Africa the list of instructive and entertaining reading material is endless. A few recommended works would certainly be any and all of those listed above, but others to look out for in your cerebral journey through the arts and expressions of South Africa would be: Oliver Schreiner’s The Story of An African Farm; any of the many works of Sarah Gertrude Millin; Sol Plaatje’s Boer War Diary; any of the many works of Zakes Mda; John M. Coetzee’s award winning Disgrace; of course Alan Paton’s defining Cry, The Beloved Country; I Write What I Like, a collection of writings by Steve Biko; any of Nadine Gordimer’s many published works, in particular July’s People, and A Dry White Season by André Brink.