The Drakensberg Mountain Range, also known as uKhahlamba, is the signature topographical feature of South Africa, and the nation’s principal watershed. The sections of the Berg that are preserved for public enjoyment form a small part of a much larger escarpment system that divides the highland interior of South Africa from the coastal littoral, and runs south to north for almost 1000km from the Eastern Cape to the north of Limpopo Province.

Of interest to visitors to South Africa and KwaZulu/Natal is mainly the series of individual parks, game reserves and wilderness areas that rim the escarpment along the border between KwaZulu/Natal and Lesotho. These run for 200km from the Sentinel in the north to Bushman’s Nek in the south, and include eight separately administered entities. These are:

From a hiker’s, climber’s or hill walker’s perspective the Drakensberg is divided into two distinct zones. The first is the escarpment face and associated hill country and grassland environment that lies within KwaZulu/Natal, and which is encompassed by all of the above mentioned conservancies. Here the emphasis is on hill and ridge walking with trails at times extending for considerable distances. Facilities are usually good, with camping and lodge accommodation offered, and activates such as horse riding, golf, spa, bird watching and fly fishing widely available.

Above the escarpment lies the sovereign territory of the Kingdom Of Lesotho, with countryside characterised by high plains and rolling hill country with a grassland and shrub ecology, and with the lip of the escarpment falling away precipitously to the east and northeast. This is a working landscape with sheep and cattle herdsmen and their dogs a regular feature. There are almost no formal facilities here, and although climbing from KwaZulu/Natal into Lesotho represents an illegal boundary crossing, this is rarely if ever acted upon. 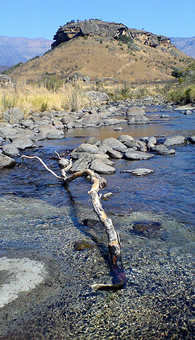 It is possible to hike within and between all of these zones and conservancies with excellent potential for extensive hikes along the lip of the escarpment. A popular long range hike is the Grand Traverse which covers the entire 200km length of the combined KNZ conservancies from above the escarpment, commencing at the Sentinel in the north and ending at Bushman’s Nek in the south.

There are many technical climb sites scattered across the Berg, with a handful of peaks only recently conquered, with with some very rarely visited.

The areas is easily accessible from either Johannesburg or Durban, with Pietermaritzburg being the nearest city, and the towns of Bergville, Winterton and Underberg the main centres associated with the mountain itself. Access the area via N3 exits at Ladysmith, Estcourt and Harrismith.

Rain is a constant in the Berg, and it is rare to complete a four or five a day hike without at least some rain. During the winter this is somewhat less than the summer although low lying mists and cloud along with persistent drizzle are a definite feature of the winter Berg. Summer, on the other hand, can enjoy high temperatures with short afternoon thunderstorms that are not a terrible inconvenience to the hiker. Either way, expect rain.

Winter snow is frequent, and guaranteed to some degree on the higher slopes and above the escarpment. Winter hiking is very rewarding for the enhanced beauty of the landscape, and although snow conditions are intense for Africa, they do not compare with the winter Cascades, Alps or even the Welsh and Scottish Highlands.

The best time to visit any highland or mountain region in Southern Africa is in the period between March and June when the rains have passed over and spring like conditions of coolness and clarity compliment a general sense of revival. An excellent time to view the local wild flowers is in late October/November, after the bushfires and just before the onset of the summer rains. This is particularly the case in Lesotho since fires are carefully managed in KNZ.

Summer rains can be quite a challenge, while winter conditions tend to preclude the novices from the higher elevations. However winter is very beautiful for those inclined to view the landscape from a hotel or tour vehicle, while many helicopter tour options are available at a variety of locations.

The KNZ Wildlife offices associated with all the various conservancies are well run and highly organised, and will require you to give detailed information regarding your itineraries should you be planning a long range hike, and it is advisable to follow all directives and protocols carefully. Rescues are expensive, and unnecessary call outs will win you no friends.

Crime: The Drakensberg shares the same general dangers of crime as the rest of South Africa. While incidences in the Berg tend to be infrequent, they do happen, so striking out alone is inadvisable. By their nature wilderness trails imply a degree of isolation. This is inescapable. While within the conservancies you will enjoy the protection of the administrative body, in Lesotho you will find yourself quite isolated, so do not draw attention to yourself by overtly displaying your expensive equipment and lavish provisions, and try and find a sheltered site to camp.

Once again incidences are very rare. Seek and follow local advice on the matter of crime and general safety wherever and with whomever you go.

In most of South Africa tropical diseases are rare, as are incidences of malaria. As a matter of policy a course of anti-malarial drugs is advisable in the province, particularly if you intend travelling further north up the coast to Maputaland.

Travel Doctor clinics are to be found in all the major centres where you can get health advice on malaria, yellow-fever, AIDS and any other tropical diseases, and acquire all the vaccinations and prophylactics necessary for your extended journey.