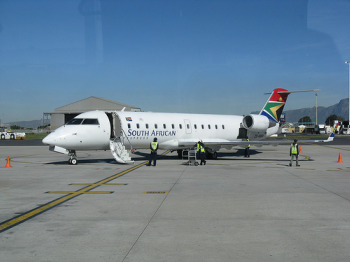 South Africa is a huge country, and one with a very limited long-distance bus and train network. To travel long distances, especially on a budget, you can take the Baz Bus, but be aware that as it makes stops at nearly every town between Cape Town and Johannesburg and doesn’t operate at night, the journey will take a long time. You can drive yourself easily and safely, but again, the country is quite large and you will need to dedicate at least one or two days of your trip just to driving in order to traverse it.

For getting between cities easily, quickly, and relatively cheaply, the best option is flying. There are a handful of low-cost carriers and international carriers serving airports all around the country. Air travel in South Africa tends to be orderly, efficient, and safe, with the both the large and small airports generally well-maintained and well-organized.

Be aware that if you purchase tickets online with a non-South African credit card, some airlines will require that you show the card at check-in. Also, when flying to smaller cities, you may need to connect in a larger hub like Cape Town, Durban, or Johannesburg. Allow two hours for a domestic connection in case of delays.

Below are the carriers operating flights within South Africa.

Kulula
Kulula is another budget carrier that connects the cities of Cape Town, Johannesburg, Durban, and Port Elizabeth to each other and to other cities in southern Africa.