Some things change, and some things don’t. Robert Mugabe, after almost five weeks of political hiatus, remains in power, while galloping inflation – touted now at about 355 000% – necessitated the issue of another new banknote, the third issue in a year. This time it was a Z$500 million bill, up 400 million from the last. Currently the rate of exchange is Z$52 million to £1 sterling. A letter I recently received from a friend in Harare told me that a brief trip to the supermarket to purchase 2 onions, 4 bread rolls, 1 packet of coffee, 2 litres of milk and a cucumber came to a total of Z$1.25 billion, which would have been Z$1.25 trillion had the Reserve Bank of Zimbabwe not recently removed several zeros from the local currency. You may ask me how does a man who presides over such unimaginable economic lunacy survive in power, and the truth is I haven’t got a clue.

While on the subject of swine species, warthogs have been creating a bit of a stir in the industry recently, contributing their share to the regular, but admittedly infrequent incidences of bitings, maulings, stingings and occasional deaths. These often result from the too-close commerce encouraged by wilderness guides between soft skinned urban tourists and wild animals. In this case it was a Canadian tourist, Brunhilde Galke, 69, visiting Huntershill private game park in the Eastern Cape, who ran foul of a ‘tame’ warthog in the dining room of the lodge. It was probably neither her fault nor the warthog’s, but a waiter who should have known better than kick the animal after it upset a dustbin in the bar area. The warthog rushed the waiter, but then vented it’s spleen more effectively against Brunhilde as she left the dining room and was making her way across the yard to her accommodations. 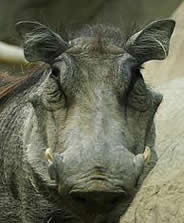 Her injuries remain serious, and several weeks after the incident the unfortunate Canadian is still in an East London hospital recovering from severe lacerations to her legs and chest. These required emergency procedures, 100 stitches and a series of drainage tubes in her arms, legs and chest. Clearly this was more than the average scare, and is a cautionary tale for tourists, private lodge owners and waiters alike. Warthogs are among the most dangerous of animals frequently encountered in these types of surroundings.

It is part of the ambience of a game lodge to have a ‘tame’ animal or two drifting through the grounds, and although a small herd of impala, or an ostrich, a giraffe, and even occasionally an elephant, are not an infrequent sight, warthogs are also regular visitors to game lodges and bush camps. And while the standard advice to remember is that wild animals are wild, attacks cannot always be avoided, and neither for that matter human stupidly.

The Lake Kariba resort of Charara is a popular local destination for mainly white Zimbabweans who retreat to the lake in large numbers on weekends and pubic holidays. Here they endure the almost obligatory slow broil under the Zambezi sun while enjoying the exceptional game viewing and fishing available on the lake. There is also an annual New Years Eve rave staged at the site, which is not always in keeping with the natural atmosphere of the area, but is thoroughly in keeping with the often thuggish behaviour of white Zimbabwean youth at play. A long time resident of Charara has been Tusker, a 50 year old bull elephant who has been a regular feature around the camp site for as long as anyone can remember. He did at some time develop the unfortunate habit of using his one remaining tusk to rip up cars and SUVs in search of fresh fruit and vegetables. This most people were aware of in advance, and a few simple precautions tended to thwart him…most of the time.

This year, however, Tusker fell victim to certain facts of Zimbabwean life. The first was the aforementioned white Zimbabwean youth at play. A selection of these, drunk, loud and abusive during the New Years Eve rave, thought it hilarious to throw bottles and beer cans at him as he made his way through camp, with a handful even trying to scratch his belly, and a few trying to pull hairs out of his tail. By all accounts Tusker handled it well, but later went on to damage beyond repair a few motor vehicles, which, although not unusual, gave the local National Parks warden the excuse that he had been looking for since the economic collapse to shoot Tusker. Soon afterwards the reason was revealed when he and and his staff distributed the meat locally to a hungry population, which was, of course, to his considerable fiduciary advantage. This is the second prevailing circumstance in Zimbabwe – corruption, hunger and avarice.

Such is the state of the game in Zimbabwe. Tusker is no more. A tidal wave of rage washed up on many shores as friends of Tusker’s from around the world made known their grief, but sadly this is a common end for wild creatures who stand up for themselves in their own habitats. The offending warthog at Huntershill was shot within hours of his mauling poor Brunhilde, and no doubt his carcase was also distributed to the staff, waiters among them. In the meanwhile the ever present monkeys and baboons, observing events from the surrounding trees, pondered the risks of human association, and thanked their primate gods that they have a better brain on the whole than the pigs.

The reputation of local warthogs, however, was redeemed somewhat by another warthog incident that had an altogether happier conclusion. A certain Victor Hugo of KwaZulu/Natal (no relation to the French author) recently opted for a tame warthog as an alternative to a guard dog to protect his property. He soon had reason to celebrate when the daring phacochoerus africanus so terrified a gang of seven burglars that they fled, leaving behind vital evidence that led to their their prompt arrest, ending a seven year career of crime in the local area. The warthog’s name is Survivor, he was not shot, and survives to guard another day. 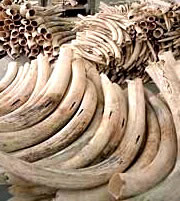 The killing of wild animals that attack and injure their human visitors has a certain sad logic, as does the culling of elephant, both of which are practices that in theory have a tough love angle, and are done with the long term well being of the species in mind. This year the South African Governent cleared the way for the resumption of selective culling of elephants in the interests of populaton control. A moratorium had been placed on the practice in 1994 as part of the CITES convention on the trade in endangered species. The decision to recommence culling may seem pervsese as conservationists gnaw their fingernails in an agony of anxiety over the gradual drive to extinction of other rare species of elephant in the Congo and West Africa, but southern Africa, and in particular Botswana and South Africa, are suffering the effects of excellent population management with a surplus of elephants that can no longer be sustained upon available habitat.

The natural extension of this is the potential for a renewal of trade in ivory. This is particularly the case with Zimbabwe, where any reason to sell anything for hard currency finds avid support in government. This has naturally excited the fears of conservationists worldlwide that elephant culling will stimlate the illegal trade in wildlife products, particularly ivory and rhino horn, that will further aggrivate the deadly delcine of central, west and east African populations.

Thanks to the US Trophy Hunters Association. We love you all!

Meanwhile, I began this post on the lunacy of Zimbabwe, so let me end there. A newsletter was recently circulated among interested parties highlighting the abuse against the natural resources of that country, and in particular the national parks, by the staff of the Department of National Parks and Wildlife Management itself. The issue that was highlighted was the uncontrolled hunting being effected in the various national parks and protected areas to the north west of Zimbabwe by various government fat cats who have, in the recent land turmoil, gained access to previouly protected areas of wildlife management. With customary indifference to the future, these people, in collusion with the departmental personel, have been allowing the commercial hunting of elephant on a dramatic scale, mainly to American hunters, who are legendary for their fat pockets and empty consciences. A certain party illustrated the degree of slaughter with an entry into a particular visitors book. Dated August 2007, it was signed by hunters from Utah, Minneapolis and San Diego, and read thus:

In case anybody was fooled into believing that this refered to a photographic safari, the plains all around were littered with the decaying bodies of entire herds of elephant, and the photgraphs were circulated to prove it.