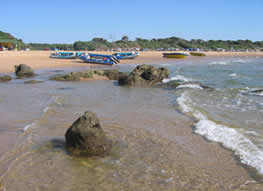 You will be forgiven for thinking that the Shootout at Sodwana Bay is yet another cowboy style cash-in-transit heist gone wrong in this country with its voracious appetite for exotic crime. In fact it is nothing of the sort. The Shootout is an annual gathering of national and international SCUBA diver photographers and videographers at one of Southern Africa’s finest coral reef sites, Sodwana Bay in the Maputaland region. This beautiful, sweeping bay on the northern borders of the Greater St Lucia Wetlands Area, itself a World Heritage Site, is home to one of the most exquisite stretches of coastal waters north of the country’s shipping capital of Durban.

How to Get There

A leisurely two hour drive from KwaZulu-Natal province’s first city along the fantastic north coast highway takes your through undulating hillsides of endless of sugar cane plantations and into the southern tip of one of the world’s largest man made plantations of Blue Gum (Eucalyptus globulus) trees. When you reach the small trading town of Hluhluwe you are just a stone’s throw away from Africa’s oldest state game reserve, Hluhluwe-Imfolozi, one of only a few serious Big 5 reserves in the country. Here the landscape gives way to dry thornveld savannah with umbrella acacias of the Safari picture postcard variety. But we are here to shoot sea-life images so instead you turn seawards rather than landwards from Hluhluwe town and a further hour’s drive along a splendid road bypassing several small African hamlets gets you to the trading town of Umbazwana, from which a rickety road takes you the last few miles to your diving paradise of Sodwana Bay.

The Sodwana Underwater Film and Video competition has, since 2000, morphed into the largest competition of its kind for amateur photographers in all of southern Africa. With over 125 entrants this year the Sodwana bay area might have resembled Dunkirk as one boat after the other motored off the soft silvery sands and into the warm Indian Ocean waters to ferry divers to the brilliant array of reefs off the bay area, best visited during the summer months of November to May. 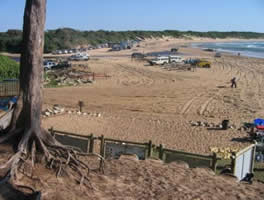 The reefs are named mostly after their distance from land starting with 2 mile and ending at 9 mile, and over 1200 species of fish have already been identified off these reefs. With Anton’s Reef, Chain and Pinnacles all at two mile and lying in water depths of 10-15 meters, every qualified diver irrespective of experience has the chance to view some brilliant fish species, from dense shoals of big-eyes, goatfish and snappers, to scorpion fish, small moray eels, big potato bass, marbled rays and triggerfish. The coral too is dense and extremely varied. Photographic and video opportunities are exhilarating and the rewards wonderful.

Further out at five mile and seven mile, where depths are at around 18-21 meters, divers can take in brilliant views of fine coral, drop offs and sponge reefs as well as turtles, rays and reasonably often the gentle whale shark. Fortunately, during the three day’s of filming, the weather was again superb and visibility at times beyond 30 meters. Surges were minimal and the film footage entered into the competition superb.

If you ever head that way, accommodation is sufficient and varies from reasonably basic to pretty luxurious cabins while the dive operators are numerous. I teamed up with a local gang called Afdive and its mercurial owner Ron Jackson, also a dive instructor, skipper and an award winning videographer. Ron’s enthusiasm and helpful attitude were a great comfort for the beginner divers. Furthermore, there was no compromise on either safety or quality of equipment, and many fine dives were undertaken during the event from Ron’s boat Torrent.

For the SCUBA enthusiast with an eye for a good picture or a penchant for film making, this is a wonderful event, held every May, to showcase your skills. Prizes were substantial and the event was a smoothly run. And for SCUBA divers generally, a combined diving and Big 5 safari holiday to this beautiful east coast area of South Africa is a wonderful experience.

This is a post by Sean Ross, travel writer and South African tourism professional