Lilliesleaf Farm: A Page in the Book of the Liberation Struggle 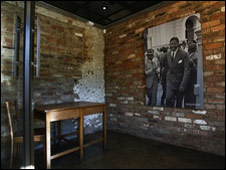 A small but important part of South African liberation mythology was committed to posterity this week when the Lilliesleaf Farm in the Rivonia suburb of Johannesburg was declared a museum and national monument to the Liberation Struggle. Although the bustling suburb of Rivonia has since grown up around this apparently innocuous house, in the early 1960s it was an isolated farm location, and proved perfect for a time for banned members of the ANC to hide-out from the ubiquitous and highly efficient police and security services. The house was home for a few months to Nelson Mandela himself as he laid low pretending to be a gardener and a cook. It was also a meeting place for most of the luminaries of the struggle, and many of the defining policies that ultimately saw the overthrow of apartheid some 30 years later were devised here.

The principal arrests that led to the infamous Rivonia Trials of leading black activists were made at the site, and although Nelson Mandela himself was not one of those netted at Lilliesleaf, he was later captured and tried alongside those that were. It was during this period that the decision was made to dispense with efforts to work within the system for change, and the necessity for a violent struggle agreed upon. Although Mandela and many of his colleagues were sentenced to lengthy prison terms, this was turning point in the struggle. It was the moment more than any other when the tide of world opinion began to shift against the perpetuation of white minority rule in South Africa.

At the cost of some US$7 million the site has recently been restored, with the addition of several new buildings, where the museum and associated learning centre will be housed. The Museum itself will include an archive that will house literature and documents relating to the history and relevance of the site, while other buildings will form the Liberation Centre that will include a coffee shop and curios outlet. The site also will feature a 66-seat auditorium where short film detailing the history of the homestead will be shown.

The site is about an hours drive from central Johannesburg and will henceforth become part of the established liberation history itinerary that includes the Apartheid Museum in Johannesburg as well as various township tours. One particular myth of the site, however, remains unresolved. Nelson Mandela is reputed to have buried a gun somewhere in the grounds that he acquired during military training in Ethiopia – the gun has never been found, although the search continues.