Getting from Johannesburg to Cape Town 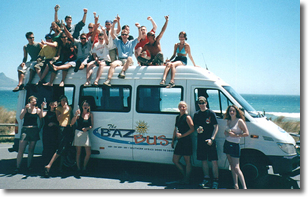 These are the two major centers of South Africa, and are situated on the long N1 highway that runs from Cape Town all the way to Musina on the South Africa/Zimbabwe Border.

Car hire is easy, reliable and inexpensive in South Africa. All the major international companies, and quite a few local variants, are represented at airports and hotels in both cities, so hiring a car could not be easier. All that you need to consider is safety, and so arrange in advance for local cell phone coverage, and make sure that your car hire includes a rescue or breakdown package, which most will, and if you do have a breakdown call for help immediately.

Other road options are the two main intercity coach services in South Africa, TransLux and InterCape, both of which run regular and comprehensive services between the two cities.

A dedicated backpacker facility is the Baz Bus, which is a service that operates on a jump-on-jump-off basis linking all the major backpackers lodges in South Africa, and there are a good many of these.

A twice weekly Premier Class train services runs between Johannesburg and Cape Town, and although Premier Class might imply luxury, actually these are fairly standard commuter trains with very safe and comfortable first and second class compartments. Bedding and meals are included as part of what is generally an overnight service, but some scheduled times cross the divide during daylight hours. Expect to pay about US$100 for this service.

Both international Airports in Johannesburg and Cape Town are world class, and transport to and from the airport is best organized by your hospitality establishment which you would be wise to book in advance.

Local taxi services, carried out in minibuses, are the backbone of mass transit in South Africa, and if you want some genuine local color then here is where you will find it, but be warned that conditions can be crammed, driving standards erratic and exposure to the local population not always friendly. Take advice from your backpackers lodge or from the traveler network before you give this option any serious thought.