Violence In South Africa: How serious is it? 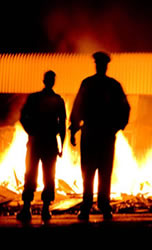 With the crazy news coming out of South Africa over the past week it was Germany that issued the first travel warning, advising its nationals to steer clear of Johannesburg, and no doubt there will be others to follow. Johannesburg is a violent and dangerous place, it always has been, and chances are it always will be. It is the City of Gold with an appropriate gold rush mentality, and the current rash of street violence is nothing new.

However it always helps to keep these things in perspective. While not wanting to take too much of a let them eat cake approach to the social divide in South Africa, the xenophobic attacks taking place at various locations around the country are confined to the townships and shanty towns where the most violent and unpredictable elements exist, alongside the regional refugees and economic migrants against whom most of these attacks are directed. These are areas that no tourist would ever knowingly wander into and expect to get out alive, just as an outsider would avoid the Gaza Strip, or any number of Rio favellas, or indeed many areas of New York, LA or London after dark.

Africa on certain levels is extraordinarily violent, but paradoxically countries like Zimbabwe, against visiting which every western government has advised it’s citizens, is for those not directly involved in the tribal demographic or political quagmire as safe as any place on earth. There has been no incident so far in Zimbabwe were a tourist or non-aligned foreign national has been injured or even inconvenienced by the troubles underway. I recall being in Ireland in the 1980s when a pair of British soldiers were publicly beaten to death on the streets of Belfast, which had absolutely no impact on my cycle tour of Donegal, and nor the evening that I spent clashing tankards with the locals at a village pub.

Anybody planning a trip to South Africa should read what is written about the violence underway in Johannesburg, and absorb some of the background of this historically troubled land, but should in no way allow that to influence their travel choices. South Africa is a highly sophisticated and regulated country with a fully functional system of law and order. Through 99.9% of the country there will be not the faintest trace of anarchy, and as with any country in Africa, mind your manners, watch where you keep your valuables, and don’t move unaccompanied after dark. With that in mind step forth and have a great time, because South Africa is a warm, welcoming and peaceful nation that needs your tourist dollars.

Read a selection of local news reports on the situation.