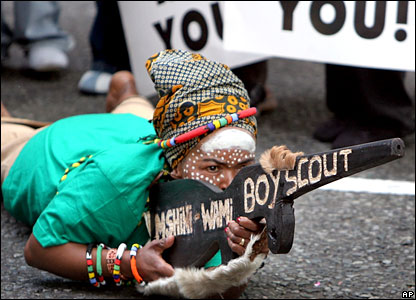 This weekend is the national conference in Polokwane, where the much hyped leadership vote, will determine the new head of the ANC. The leader is chosen by some 4000 ANC delegates countrywide, and the hugely controversial Jacob Zuma is tipped to win the top spot.

Since South Africa’s democratic début from apartheid in 1994, there has been no meaningful opposition to the ruling ANC party. This means that whoever is voted leader of the party, is guaranteed to be the country’s next president. (arms deal convictions not-withstanding)

Jacob Zuma has pitched himself as the “friend of the the little man” a “revolutionary” and has strong ties with the trade unions, youth league and Communist party. In other words he is dreaded by big business, and the middle to upper classes. In a country riddled with crime problems, his sigbiture tune “Awuleth’ Umshini Wami” or (bring me my machine gun) is grossly inappropriate and irresponsible.

The rest of Africa (and the world) is seemingly speechless with surprise that Jacob Zuma has shrugged off his many detractors, and smirches on his name. Mail & Guardian. 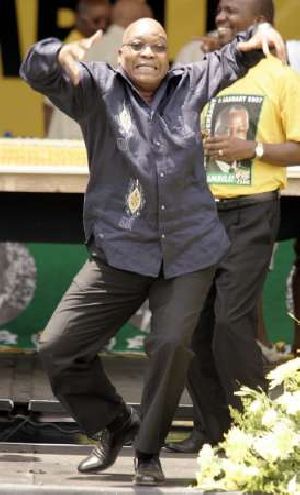 “Charles Onyango-Obbo of the East African predicted that South Africa is about to ridicule itself internationally and lose its political credibility. He feared the ANC “is close to serving up one of the continent’s biggest political embarrassments by electing former vice-president Jacob Zuma as its leader”.

Onyango-Obbo also warned that making Zuma top presidential candidate would negatively affect not only South Africa, and pleaded for other critics to speak out as the situation is “so critical to Africa at large, we cannot say enough about it”.

On the upside with the impending weaker currency (Rand), South Africa will likely return to being a highly affordable tourist destination…