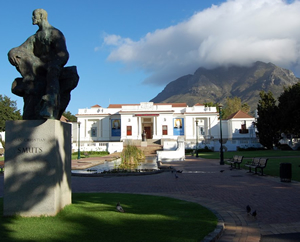 Of all the towns and cities in South Africa Cape Town is perhaps the one with the most to offer a casual visitor.

The city of Cape Town is one of the oldest established municipalities in southern Africa. Only the earliest administrative settlements in Mozambique such as Ille de Moçambique, Inhambane and Maputo predate the European settlement of Cape Town.

Kaapstad, as the city is known in Afrikaans, was first settled by the Dutch in 1652 and was later assumed by the British as a consequence of the Anglo/Dutch Treaty of 1814. Its first local government was established in 1839.

Since then the city has grown around its majestic peninsular setting to absorb a number of smaller coastal and inland settlements into the dissipate but passionately cohesive city that compliments the Cape of Good Hope today.

Cape Town has an impressive selection of monuments and museums…

Thanks to this long history Cape Town is rich with monuments, cultural quarters and multi-layered period architecture. Take a walk or a guided tour through the historic Company’s Gardens which was the original administrative quarter of the city, and which now contains some of the finest examples of imperial Cape Dutch architecture. As the name implies the horticultural artwork of this inner-city park is superb, but look out also for the various art, history and culture museums and a general sense of European antiquity in the heart of southern Africa.

If all this just leaves you with an appetite for more then spend a day or two visiting some of the many cultural museums in Cape Town, some grand and some humble, that all showcase the extraordinary human diversity of this city.

From the Bo-kaap to Robben Island, the historic heritage of Cape Town is alive and well, and remains a source of unique pride to all who live within it.

>> A number of self guided walking tours are mapped for the Company gardens and surrounding areas of cultural interest.

This is the home of South African wine and haute cuisine…

With all this history it is hardly surprising that a richly layered food and wine culture proliferates to compliment the general air of old money and new in the cultural heartland of South Africa.

Wine: The wine industry in South Africa can trace its roots first and foremost to the supply of passing ships of the Dutch East India Company to which the city itself owes its origins. The religious persecutions of Europe during the Counter-Reformation that drove a wave of French Huguenots to the Cape added much to it. What has emerged since is one of the oldest and most revered wine industries in the New World.

Food: The unique cuisine of the Cape, as with much else that identifies this region, is a merger of the dominant European tastes and preferences with everything introduced by the importation of slave and bonded labour from across the orient, the far east and Africa itself. The result is Cape-Dutch, or Cape-Malay cuisine, a piquant evolution of spice and sophistication, and of sweet and savoury that cannot be easily described, and certainly cannot be fully appreciated by any sense other than the palate itself.

No visit to the Cape region of South Africa is complete without a journey through the eateries, vineyards and cellars that proliferate throughout the region.

>> There are several distinct wine routes in the Cape that offer insights into a diversity of different classes and styles of product. Check out the Wine South Africa website

More than thirty beaches to choose from…

Two oceans merge at the Cape, with the warm southward moving Mozambique Current of the Indian Ocean meeting the cold northwards moving Benguela Current of the Atlantic. This, combined with the deeply indented coast of the Peninsular, offers a selection of beaches and inlets that each have a distinct and very different character.

The Cape coast on the whole has a temperate feel with a grandeur and drama very different from the sun-drenched coast of KwaZulu Natal.

There are about thirty named beaches accessible from Cape Town itself, and although hardly tropical, the beach culture of Cape Town is a vital part of the identity of the city, and a must for any casual visitor.

The garden capital of South Africa…

The Cape occupies a unique and unusual African eco-zone, with the dominant style of vegetarian being what South Africans call Fynbos. Within this classification is found one of the widest diversities of flowering plants on the planet, with the iconic Protea being just one of these. Capetonians take their horticulture very seriously, and the color and vibrancy of the city’s public and private gardens rarely fail to amaze and delight.

Arguably the most famous botanical garden in Africa is Kirstenbosh Botanical Garden in Cape Town. Here you can also enjoy summer concerts and a variety of other cultural events.

>>While in Cape Town take the opportunity to visit as many botanical gardens, parks and public spaces as you can

A mecca for mountain and marine sports…

The first thing you will see from just about any vantage in Cape Town is the signature Table Mountain, or Tafelberg, that is the principal icon of the city. Check out some of the many walking trails in and around the city.

Cape town is defined by some of the most beautiful mountain habitats in the world, and alongside this there is available from any number of local adventure outfitters every conceivable mountain adventure and sport. Add to this aquatic sport, sky diving, and further afield shark cage- diving and whale watching it is clear that once you have had your fill of the genteel pursuits of the city there is more than enough scope to wake yourself up with some adrenalin sport and high adventure.

>>Cape Town and surrounds enjoys a reputation as one of the best golfing cities in the world, Check out some of the amazing golf courses in and around the penninsular