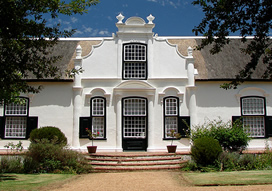 Fine food and wine has been a tradition at the Cape since founding administrator Jan van Riebeeck produced the first recorded Cape wine in the year 1659. An extremely fertile industry was then founded that has been built over many generations into the celebrated wine industry and culture that defines the Cape region today.

Accompanying this, the many cultural and ethnic influences that merged at the Cape, some willingly, but many not, contributed an extraordinary diversity of influences into the general mix of Cape cuisine. Cape Malay is perhaps the most piquant, being a mix of local, Dutch, and variety of east Indian and oriental influences, all merged on a palette of colours and flavours that are distinctly African in origin.

It would be impossible to do justice here to what is available in Cape Town in terms of Cape wines and cuisine, but a brief sketch of the landscape might serve to inspire you to research the matter more closely, and to ensure that when you do land in the Mother City, you do not miss the opportunity to see, feel and taste this most unique of Capetonian experiences.

The quickest and easiest access to the wine experience from Cape Town is to visit Constantia, situated well within the Cape Town metropolitan area, and home to three significant wineries. Groot (large) Constantia is the oldest winery in South Africa, and as such is a National Monument, and producer of several notable red wines including Shiraz and Merlot. Another is Klein (small) Constantia, also among the oldest wineries in South Africa, and noted for white wine production, particularly Sauvignon Blanc and Riesling. Also in the area is the Constantia Uitsig winery.

A far greater diversity of vineyards, wineries and associated hospitality establishments can be found in the Wine Region of the Cape hinterland.

Complimenting this, and to relied upon to showcase all the favourite labels of South African wine, are the many restaurants and eateries of Cape Town. These combine to illustrate the multi-cultural past and present that Cape Town has, and continues to enjoy. Needless to say fish and seafood feature prominently, and from a series of franchise outlets to many hotel and independent restaurants, Cape Dutch, Malay and international styles of seafood add to the general variety. Indian cooking is a regular favourite in South Africa with both home and local styles, while Indian spices and methods are very evident in many, if not most Cape Dutch and Cape Malay recipes.

South Africans love meat, and are convinced with reasonable cause that South African beef is the best in the world. Lamb and mutton is also a favourite, and features widely in the Malay and Dutch styles, with the recent addition of such peculiarities as crocodile steaks and ostrich, which is famed for its lean, red meat.

At almost every turn in Cape Town there is a unique establishment offering an individual take on a local favourite, or a more cosmopolitan menu appealing to the diverse tastes of indigenous Capetonians. If food and white is your alpha and omega, then Cape Town will be just the beginning of a South African culinary odyssey that you will never forget.

Here are a few selected links to help you search deeper into this extraordinarily rich area of South African culture.