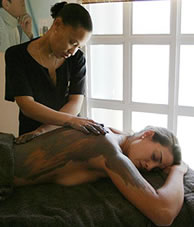 Situated as it is on a windy peninsular between two oceans, simply being in Cape Town has an invigorating effect.

The visual backdrop of the Berg, the rarefied air, the unending layers of green and the vivacious floral displays all tend to add to an overload of the higher senses that simply invites an emersion in mineral water, a long massage, a sauna, a steam bath and aroma therapy, all topped of with excellent wines and fine haute cuisine. If you are in Cape Town, and you have the time, try a few of these options to begin your return journey to youth & well-being.

The Vineyard Hotel & Spa in Newlands suburb probably tops a salubrious list of Cape Town venues, and indeed locations throughout the province, that offer fine food, luxurious accommodation and superb spa facilities. Set close to the western slopes of Table Mountain, on a leafy avenue and in manicured gardens, the hotel has 175 rooms, all superbly appointed – although some better than others – but in particular those with a mountain view. Standard facilities are high speed internet and satellite TV as well as all the other basics you would expect at an establishment of this standard. The spa is an Ansana spa, the first of its kind in South Africa, and named after an exotic tree with the ephemeral habit of bearing blossoms unexpectedly, and for a single day. This is symbolic of living for the moment, and seizing fleeting experiences as they pass.

Nestled in the lee of signal hill, Mountview Spa & Guesthouse, as the name implies, enjoys an excellent view of the mountain, and proximity to both the beaches and the main sights and venues of the City Bowl.

In the shadow of the jagged ridge of the Twelve Apostles, and looking out across Camps Bay and the Atlantic Ocean, the Twelve Apostles Hotel & Spa shares equal access to the beach and the languid fynbos trails of the south Berg. An award winning facility, the hotel is a mix of modern and traditional, and is as slick and refined as any other on the long list of fine South African hospitality establishments. Here the Sanctuary Spa is integrated into the local environment, and offers treatments drawn directly from the natural flora found in the neighbouring hills, while maintaining more than a little of an oriental flavour.

Also in Camps Bay is the Oceana & Camps Bay Luxury Suites and Spa, which, although in a more suburban setting, enjoys similar access to the beaches and the Berg. The associated Royaume Spa is open to the public and offers the usual menu of beauty and wellness therapy.

Situated above the beautiful Constantia Valley near Klien Steenberg, the aptly named Stillness Manor & Spa is an extensive property in a rural setting with excellent views of the Steenberg section of the Berg. Displaying classic Cape/Dutch architecture, the manor has limited accommodation, 14 suites, and a small but well appointed and comprehensive spa. It is ideally placed to access a number of golf courses, and is in an established equestrian area. Expect a high standard of personal service and an authentic Cape hospitality experience.

North of Cape Town in the Durbanville suburb is located the Rustlamere Guest House, Spa & Conference Centre, a four star establishment that tends to lack both age and character, but offers stylish accommodation and an excellent spa and fitness centre. It is probably less a retreat than an integrated business facility, and indeed styles itself Executive Accomodation.