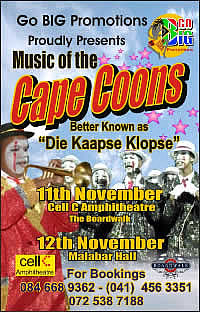 Cape Town has a reputation to maintain in the fields of arts and cultures, and rarely does it disappoint. There are several annual festivals celebrating the diversity of Cape Town culture, as well and a huge variety of standard venues, and several festivalettes that happen frequently throughout the city.

The Kaapse Klopse: Hold onto your hat and be prepared to be swept away in a uniquely Capetonian celebration of colour, vivacity, life and humour. Originally called the Coon Carnival, and still persistently attached to that name, the organisers have reverently renamed it the Cape Town Minstrel Carnival in respect of foreign tourists who do not share or understand the defiant self deprecation that is a hallmark of the nationally famous coloured, or gamut sense of humour. In southern Africa the word coloured does not imply people of colour as it does abroad, but is an umbrella term for the specific culture of mixed race society that is unique, separate, proud and venerable.

Customarily beginning on New Years Day, and continuing into January, the Klopse is a minstrel festival styled very loosely on the American Black & White Minstrel tradition, but with very little deference, and a great deal of unabashed humour. Associated with the festival is an explosion of grass roots Cape/Malay culture in song, dance, fancy dress and food & drink.

Cape Town Pride: If the theme is loud, proud and brash, then the Cape Town Pride follows very close behind the Klopse in all of the above. One of the great things about Cape Town is that it is an island of liberal values in a sea of conservatism. There is a greater likelihood of pigs flying in any other capital on the continent that gay men and women stepping out in a festival of alternative sexuality. Between February and March the annual Cape Town Pride Festival occupies the city for a hectic and irreverent 10 day splash. It is probably not the most famous nor extravagant pride festival on the global calendar, but the fact that it happens at all it worth celebrating.

Cape Town Festival: This is a more orthodox festival of the arts that runs through March for three weeks, and is focused primarily on the City Bowl and the V&A Waterfront. The Cape Town Festival is socially alert gathering of conscious souls anxious to promote the highest values of Cape Town and South Africa. As such it never veers from politically correct themes, despite which it is a rich and authentic expression of local arts, music and culture.

Cape Town International Jazz Festival: This is perhaps one of premier events on the South African music festival calendar, which is saying a great deal, and celebrates an aspect of South African music that enjoys a long tradition, considerable diversity and a surprising plethora of cultural interpretations. Running for two days in April it is probably impossible to take in all of the many acts on offer in a diverse selection of venues, as well as a range of seminars and workshops, so a fairly careful study of what is on offer beforehand is always worthwhile.

The Cape Town International Film Festival: This is a rather new and shaky venture that has yet to find its feet. Afro film buffs refer to the official site.

Cape Town Fashion Week: Usually held in August, Fashion Week, as the name implies, is a showcase event for the latest South African designs and designers, which is again an industry in South Africa that is surprising in its diversity and sophistication. It attracts a large number of local and international fashion celebrities and brings to the Cape a flush of high glamour, glitz and style.

The Victoria & Alfred Waterfront is arguably the main focus of the annual music and arts calendar in the Cape, and with a variety of venues of all styles and textures, and an extraordinary range of events, a visit is never a disappointment.

Kirstenbosch Botanical Gardens: Frequent summer open air concerts are held at the Kirstenbosch Botanical gardens which is one of the more pleasant experiences of Cape Town. These tend to have a cerebral overtone in keeping with the genteel setting, with some larger events and open air festivals, so bring a picnic and enjoy the setting and a variety of musical performances.