The Surfing Hippo of KwaZulu/Natal 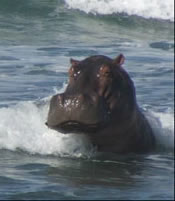 A curious story of a surfing hippo has been doing the rounds in South Africa recently. First spotted in the KNZ coastal resort town of Ballito, situated about 40km north of Durban, the vagrant hippo has been steadily making its way south from the area of the St Lucia wetlands in Maputaland, where the species is very common. Reminiscent of the early 20th century odyssey of Huberta, this travelling hippo has generated enormous local sympathy and interest.

Huberta was born in the St Lucia wetland system in 1927, and a year later was on the move, migrating south on an epic 1600km journey that would take her all the way to the Eastern Cape. She was initially thought to be male, and was named Hubert, which was later changed when it was discovered she was female. Her journey took her three years during which time she became something of a local and international celebrity. She successfully evaded many attempts at capture before eventually making her way as far south as East London. There, although having been declared en-route to be Royal Game, and thus protected by the Crown, she was shot and killed by hunters. Her body was then reverently shipped to a taxidermist in London, after which she was returned to South Africa where she can still be seen at the Amathole Museum in King William’s Town.

Although as yet unnamed, Huberta’s modern day relative could easily wander just as far in his (or her) journey south. Currently, however, it can be expected that some action would need to be taken before he could be allowed to blunder into any of the urban developments surrounding Durban. Hippopotamus are widely regarded as the animal most dangerous to humans in Africa, accounting annually for the largest number of fatalities. Although this is mainly thanks to shared resources of rivers and lakes, and is not indicative of any unusual aggression on the part of the species, the fact still remains.

As a consequence both the general public and officials of KwaZulu/Natal Wildlife have been observing the animal’s two month solo migration with considerable anxiety. The Wildlife Department is hesitant so far to take any action, such as to dart or try and capture the creature, since it is posing no immediate threat to local beach communities. To dart the animal would cause it to retreat into the surf, after which it would obviously drown. So far the animal comes ashore occasionally to forage, but tends otherwise to keep close to the water where he enjoys riding the surf. He has not yet posed any particular threat or inconvenience, and has in fact gathered quite a considerable amount of local celebrity.

Observers are all meanwhile hoping that in due course this particular hippo will turn around and head back to the safety of the St Lucia Wetlands National Park, where he will be safe. If not, and if his journey continues south as did Huberta’s some 80 years earlier, KNZ Wildlife officials sadly admit that his chances of survival are not particularly good.