From Cape Town to Maptaland the range of beach and ocean-side destinations in South Africa is quite bewildering. From the potential for on-road/off-road and self-drive touring to dive, golf, whale watching, shark diving, beachside spa and wellness, big, small and medium game fishing, and if nothing else the great food and wine culture of the Cape set against a backdrop of endless temperate coastline that speaks in hushed tones of the elegance and sophistication of Cape society. 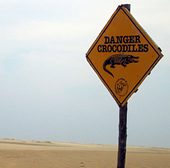 This is part of the Greater St. Lucia Wetlands Park, a complex of unique eco-zones that encompass a UNESCO International Heritage Site. This is South Africa’s tropical coastline, and is situated in the wild and beautiful Maputaland region. South Africa has few coastal regions that can described as being truly off the beaten trail, but this is one.

A great rarity among African coastal metropolis is a viable and adjacent beach culture, but Durban is the exception. Durban is the sultry port city of KwaZulu/Natal, with all the spice and sophistication to reflect the multi-culturalisim that makes South Africa such a uniquely interesting destination. All of Durban’s beaches are lively, colorful and clean. Most are Blue Flag rated, and although as in most big cities the beachfront can be dangerous after dark, during peak hours the waterfront is packed with entertainments and is a great family destination. 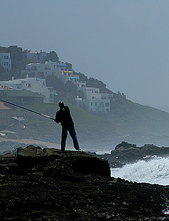 This is one of the signature KwaZulu/Natal beaches, set against a backdrop of holiday accommodation and tourist facilities and with a long sandy beach for leisurely stroll, or a day or two of family beachside fun. The Tourist angle is not overbearing, the sea is warm and surf mild, and with plenty of entertainment options including golf, scuba, microlite flights and a selection of great seafood restaurants.

The KwaZulu/Natal South Coast is the raucous cousin of the quietly sophisticated Cape and Garden Route coastline. Filled with color and vivacity, and set against a shockingly green backdrop of estuaries and verdant forests and hillsides, this is South Africa’s favorite resort destination, and is packed to the gills with family entertainment. Margate and Ramsgate beaches are within a few miles of each other, and are ringed with holiday accommodation, malls, restaurants and recreational facilities. Light surf, soft sand and great lifeguard facilities make these two the top South Coast beaches. 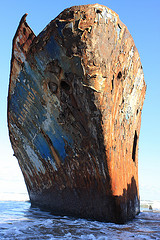 Mdumbe Beach typifies the long expanses of un-trodden beach that so characterize the Wild Coast. Fringed by milkwoods, rolling grassland and rural African homesteads, the Wild Coast is a rare sight in a highly developed region, and is one of the most beautiful and unspoilt regions of a beautiful country.

As the south coast road drifts south towards Port Elizabeth the texture of the seaboard changes from tropical to temperate, and the more traditional sights and sounds of old South Africa come to the fore. Humewood Beach is a typical Eastern Cape seascape with mild surf and wide expanses of sandy beach. PE is close to the Addo Elephant Park and the famed Cape Garden Route. Port Elizabeth is an historic South African city.

Grotto beach is the signature white sand Cape seascape set in the signature Cape Coast small town. Hermanus is the whale watching capital of South Africa, besides which it is one of the most sublimely pleasant settlements in the region. With white dunes, a mountain backdrop, easy access to some of the best food and white purveyors on the coast and with unobtrusive beach facilities, this is one of SA’s top beach spots.

The home to perfect wave, and the surf capital of SA. Set against a typical East Coast backdrop of sand, dunes and aloes, Jeffreys Bay is home to the annual Billabong Pro WCT surfing event and boasts one of South Africa’s many Blue Flag beaches. It also famous fro seafood, particularly its calamari, and for a variety of watersports and venture activities. Jeffreys Bay is definitely one of SA’s premier beach destinations.

Visitors to Gaansbaai are not usually thinking about the beach. This is the cage diving mecca of South Africa where close encounters with great whites are a daily feauture. Despite this Gaansbaai is another of those languid stretches of white sandy beach with dunes and mountains to set the soul aslumber. Great food and wide are also a feature of this Cape Coast Wonderland.

Cape Town is not a beach but a bunch of beaches, and all rank up there as among the best in the land. Clifton Beach is perhaps the most famous, but others like the nudist Sandy Beach, and Muizenberg, Kalk Bay, Boulders Beach, Noordhoek and Camps Bay all grace this most beautiful of all the worlds graceful cities. Cape Town is a jewel, and as a coastal town one of the choisest in the world. It cannot be beat, so don’t even try.

Beach Facts: The KwaZulu/Natal South Coast and Maputaland are comfortable all year round, although summertime (October/March) can get very hot and sticky. There is always a Christmas holiday rush at all of South Africa’s holiday destinations, and in particular at beach resorts, so advance book or avoidance is the key here.

The waters of the Atlantic Seaboard – those around Cape Town as far east as Hermanus, and along the coast west of Cape Town, are always cold. This is a summertime destination with sea temperatures in the region of 12C or 13C, while further east, as the Indian Ocean currents appear water temperatures rise to 21C and 24C on beaches around Durban and north-east, up to Cape Vidal. Summer air temperatures range from a low of 22C in Nature’s Valley, to 28C plus in Camp’s Bay [Cape Town], Durban and up to Cape